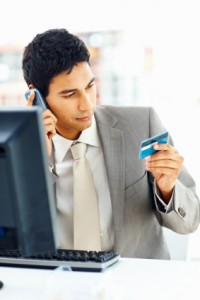 I’m currently preparing to leave town for a family vacation. One of my last tasks (aside from actually packing!) was to buy tickets to Disneyland. I know, I know… But hey, with four kids, it’s a blast. 🙂

Anyway, my ticket-buying attempts were initially thwarted by a “temporarily unavailable” Disney ticket site. About an hour later I was able to get through, but my purchase was denied. I double-checked my info and re-submitted only to be denied again.

Frustrated, I hopped over to my e-mail to check for any last minute messages that need to be dealt with. Lo and behold, I had a message from American Express with the subject line “Fraud Protection Alert.” I opened it and found that, sure enough, my attempted Disney purchase looked fraudulent to them.

I quickly called them and was greeted by an automated system that wanted to validate three recent charges. The first was Disney. No problem. I said “yes” and the system moved on. The second was for HCA something or other. I didn’t remember it off the top of my head, so I said “I don’t know.”

Ooops. That was enough to get me thrown into the queue waiting for a human. This wouldn’t have been so bad except I needed to get the card unlocked so I could complete the purchase. So I waited. And waited. And waited. When I was finally connected to a real live person, we went through the same thing all over again.

Yes, the Disney charge is okay.

According to the rep that one was flagged because it was a sizable charge and we hadn’t “shopped” there before. Right. Disneyland tickets are expensive, and they aren’t the sort of thing that most people buy on a regular basis.

No, I don’t recognize the name on the other charge, but that doesn’t make it fraudulent.

Same deal for the third charge.

As it turns out, the HCA charge was related to the bill for a doctor’s visit while on vacation over Spring Break. We were billed by the Urgent Care clinic, but it showed up as HCA when the charge came through. I have no idea why that one was flagged as potentially fraudulent, except that it was an out-of-town charge.

And the other one was similar. I had made a purchase from the Dockers online store, but the name associated with the charge was different so I didn’t recognize it at first. But it was still legit. In this case, I guess (?) it was flagged because it was an online vendor that I hadn’t bought from before.

Ultimately, I don’t have a problem with credit card issuers being diligent and trying to prevent fraudulent charges. But really, if you’re going to throw up a red flag and prevent me from making a purchase, at least have the decency to have enough customer service reps staffing the phones so I don’t have to sit on hold to get it sorted out.