Have you ever wondered what sort of impact paying off your mortgage would have on your credit score? I have. In fact, that’s the primary reason that I signed up for a free trial of MyFICO ScoreWatch late last month.

Well… I now have my “before” and “after” credit score, and guess what? It went down! At the time we paid off our mortgage, I had a FICO credit score of 781. Fast forward a few weeks and I got a ScoreWatch e-mail alert. Bingo. Just what I had been waiting for.

Which was followed by this little gem…

Just to be sure that the mortgage was to blame, I poked around a bit more. And… Boom goes the dynamite: 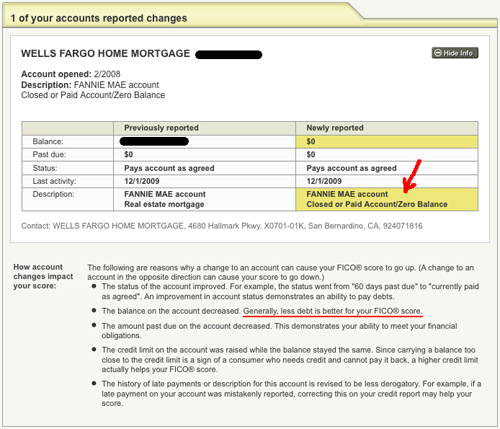 The only change they were showing was our lump sum mortgage payoff off which resulted in a zero balance. Interestingly, when I read on about how this change might impact my credit score, I learned that:

“Generally, less debt is better for your FICO score.”

(in case you can’t read it, that’s the bit underlined in red)

I’m no FICO credit score expert, but my understanding is that the decrease occurred because I no longer have any installment loans. Apparently their algorithms aren’t smart enough to distinguish between people who’ve never had an installment loan and people who’ve had one, never made a late payment, and paid it off within the past month.

Anyway, I’m not sweating it, but I thought it would be worth tracking to see what would happen. I also thought some of you might be interested in the outcome. Thoughts?