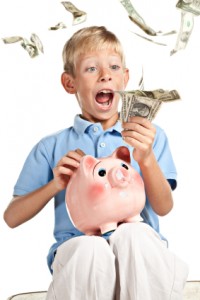 Lots of articles try to convince you that raising money-smart kids is a good idea, but you know better. Who wants kids who limit their immediate gratification by putting money in a savings account? And every parent knows life is a lot better if you shut your screaming kid up by buying her everything she wants at Toys R Us, right?

If you sometimes worry that your kid is too wise and worried about money, just follow these eight tips and nip that fiscal responsibility in the bud:

1. Buy them everything they want

Hey, let’s be honest, isn’t life better when you just buy the little duffers whatever they want? It stops the whining immediately and keeps the kids busy for a few minutes so you can enjoy that $5 latte you just bought. So what if they start to believe that they’re entitled to everything? Isn’t entitlement the American way? We deserve it all!

2. If they break it, replace it

Oh, poor little Johnny stepped on his new squirt gun that he tossed on the floor last night. It’s busted and he’s bawling. Don’t put up with that — rush over to Walgreens and buy him another one right now! You don’t want the kid to learn about consequences, do you? That might spoil his morning.

3. Teach them that money grows in your wallet

Your kids don’t care how long and hard you work for your paycheck, so don’t bother discussing the connection between work and pay. Instead let them believe money just miraculously appears whenever they want something. Life is lot more magical that way! Don’t spoil their youth by suggesting that life could possibly be anything other than one happy day of overconsumption after another.

Hey, kids do as their parents do, right? So teach them slovenly financial habits by displaying those habits yourself! Run up your credit cards, pay your bills late (if you bother to pay them at all), buy lots of cheap stuff you don’t need, don’t use coupons, don’t take care of your possessions, buy the latest smart phone even if the one you have is perfectly good, run the water while you brush your teeth, drive your gas guzzling SUV even when you’re just going around the corner to pick up another sack of burgers instead of making dinner yourself…

Since money practically grows in your wallet (see item 3 above), why not share the wealth with your kids? Don’t hold back, especially when they’re teenagers. After all, you don’t want your kids to be out with friends and run out of money, do you? Someone might think you’re poor! Instead, give your children a big enough allowance to let them treat the whole gang when they go to McDonalds.

Don’t bother asking your kids to do anything to earn the money you’re doling out to them. After all, this might teach them the concept that money comes from hard work, which is such a drag (see item 3 above). Wouldn’t life be better if no one needed to work? Let your kids enjoy that fantasy for as long as possible. And don’t even think of asking them to mow the neighbor’s lawn or get a part time job when they’re teens — come on, they’re only young once!

If Grandma sends Madison $25, march her to Target right now before that money burns a hole in her pocket! Saving money is so overrated — have you seen the dismal interest rates banks pay on savings these days? And forget teaching your kids how to invest in the stock market — it’s bound to crash again some day. Your kids are much better off blowing through the money right now.

8. Skip the thank you notes

Speaking of that gift from Grandma, don’t trouble yourself trying to get your little honey to sit still long enough to scratch out a note of thanks. That’s so old fashioned! Why should your children be grateful for what others give them? They’re entitled to it, right? Writing a thank you note might remind them that they aren’t the center of the universe, and you certainly don’t want to burst that bubble!

You might read somewhere that kids who learn how to handle money grow up to be money-smart adults, but wouldn’t you rather have kids who live in the moment and don’t worry a whit about the future? Life will be much more fun for them, right? Right?