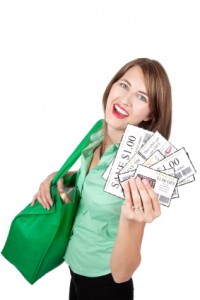 I understand folks wanting to save money on groceries. However, while at the grocery store this past Saturday night, I witnessed some hard core couponing. The guy ahead of me in line bought something like 24 cans of Chunky Soup for $1.95 total. That works out to roughly $0.08 per can.

So how did he do it? Apparently the store was running a special of some sort, and he combined that with a bunch of $0.50 coupons that the store doubled to $1. The coupons themselves appeared to have been printed out, so when I got home I did a bit of investigation.

Sure enough, you could get the very same coupons from Campbell’s Kitchen. It’s clear, however, that these coupons weren’t intended to be used twenty (or more) at a time. In fact, Campbell’s uses special coupon printing software that attempts to limit your ability to print extra copies.

Before we go any further, let me just acknowledge this: As far as I know, this guy has 20+ couponing friends, none of whom like Chunky Soup, so these may have all been legit copies. But even so, the coupon clearly state “One coupon per purchase, ” and he was using two dozen.

So why didn’t the clerk challenge him? After the guy left the store, she rolled her eyes and said something to the bag boy. I couldn’t hear the entire conversation, but I did here her say “Well, you can’t challenge them or they’ll freak out.” Interesting.

A trunk full of soup

When I left the store, I passed by this guy loading his haul into his trunk. As I walked past him, I noticed two interesting things. First, his license plate was from a few counties away. Second, he appeared to have several more bags of soup cans from the same grocery chain already in his car.

While I can’t say for certain, it appeared that this guy’s idea of a big Saturday night was hitting numerous grocery stores within a several county radius with a pocket full of printable soup coupons.

Now, my point here isn’t to pass judgement on this guy in particular, but rather to bring up the general topic of what one might call “extreme couponing, ” and to get your thoughts on it.

For starters, there’s the time and money invested. Sure, he got 100 or more cans of soup for less than $10, but he also appeared to have burned a Saturday night and a bunch of gas doing so. Beyond that, there’s the issue of ethics…

It’s pretty clear that this guys was breaking the rules, but the clerk let him get away with it. Her reaction (“they’ll freak out”) was particularly interesting, as it suggests that she has had numerous run-ins with people who have essentially bullied her into letting them break the rules.

My own view is that you should do whatever you can – within reason, and without being dishonest – to stretch a buck or grow your savings. We rarely use coupons, but that’s mostly because we’re lazy and choose to focus our energy elsewhere, not because I think there’s anything wrong with them.

If someone can go out and get a cart of groceries for $3.00, that’s great… As long as they can do it without being dishonest. But to me, life’s too short to compromise my principles over something like cheap groceries.

What do you think? All’s fair in search of a “good deal”? Or is this sort of behavior going over the line? Leave a comment and let us know what you think.