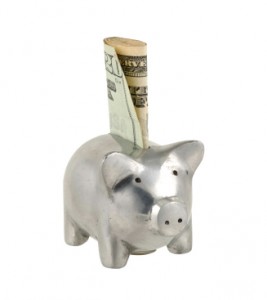 I’ve tackled this general topic in the past, but I recently ran across an article on Time Moneyland talking about about the financial impact of packing your lunch instead of eating out. Back when I first wrote about this, I mused that if I could save just $3.50/workday ($70/month) and invested it at an 8% annual return, I’d have just shy of $100k in 30 years.

Based on a recent survey, however, the author argues that the potential savings are even larger. Apparently the typical workday lunch costs between $7-$13 (so let’s just call it $10). Thus, if you eat out daily you’re spending around $2500/year. And even if you eat out just three times per week, you’re still looking at around $1500/year.

Of course, they neglected to back out the costs associated with brown bagging it when they wrote their title (How to Save $2500 a Year on Lunch!), but still. They make a good point. While there are a great many people that are already cutting these sorts of corners to make ends meet, there are an awful lot of people who are blowing through their money on a daily basis.

Sure, these aren’t huge expenses, but they add up over time. And when money’s tight, you may end up trading off such expenditures against valuable opportunities to secure your future. The author of the Time article makes the point that the savings could go a long way toward getting you to earning your employer’s full 401(k) match.

Let’s take it a step further… Let’s assume that you’re already doing the right thing and contributing to your 401(k) at least enough to get your employer’s matching funds. But what about an IRA? Are you funding one of those, too? In many cases, the answer is “no”. Why? Because money is tight.

But if you ditch that $10 daily lunch and brown bag is for $3 instead, you’re saving $7/day. That’s $35/week or $1750/year. Stash those savings in Roth IRA for the next 30 years at a relatively conservative 6% annual return and you’ll have just shy of $150k in tax free IRA distributions waiting for you at the end of the rainbow.

Yes, in the interest of simplicity, I’m ignoring the effects of inflation. But inflation cuts both ways. The value of the dollars at the end will be lower than they are today, but the amount you’re stashing on an annual basis will likely be increasing (e.g., following a 3% price increase you’ll save $7.21 instead of $7 by packing your lunch).

2 Responses to “Funding an IRA with Your Lunch Money”