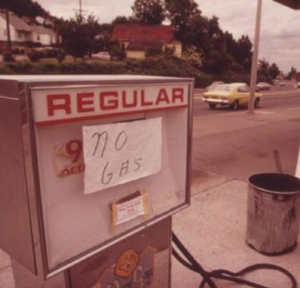 If you are old enough, you will remember 1973, when OPEC caused the price of oil to quadruple. (If you’re too young, simply Google “1973 oil crisis images” to see an endless parade of people stranded at gas stations with hand-written signs like the one in the picture.)

That crisis changed life in America forever, starting with an almost instantaneous recession, as businesses couldn’t absorb such a dramatic hike in one of the most pervasive costs in the economy. The malaise brought on by the oil shock lasted more than a decade. Inflation became a part of daily life, while the economy stagnated, giving rise to a new term: “stagflation.”

It got worse in 1979, just when ordinary people had become used to higher oil prices, and it precipitated the worst recession since the Great Depression. Home mortgage rates spiked to over 18 percent before the economy recovered (as it always does).

Since then, we’ve all adjusted to an environment which includes high oil prices.

New home appliances continue to use less energy. When our furnace went out recently after 30 years of service, even the cheapest model we could buy was way more energy efficient than the dinosaur headed for the landfill. The biggest users of oil — namely, automobiles — continue to use less fuel every year too. It wasn’t much more than a year ago when manufacturers tried to outdo each other with their 40 mpg mainstream models — unthinkable even 10 years ago. We don’t bat an eyelid at electric cars anymore, even luxury electrics like Tesla.

The adjustment is due, in part, to Government regulation; but it also reflects a shift in our culture and values. Despite the culture of conservation, however, the development of other countries and general population growth across the world have led to a consistent rise in the demand for oil. Production has kept pace; but, as Jigar Shah, founder of SunEdison pointed out recently, about 3.8 million barrels per day’s worth of low-cost production is lost each year as older, low-cost wells run dry. Adding capacity to replace that supply requires higher-cost sources. If those sources are not developed, demand will outstrip supply and the oil price will rise again.

In 2008, the price of oil spiked above $100 for the first time, but the financial crisis saw worldwide demand decline and, with it, the price of oil. As the world’s economies recovered, though, so did demand and the oil price, until the world seems to have become accustomed to oil prices north of $100.

That environment brought us things like fuel surcharges on just about every bill we pay, and hybrid and electric cars. It even caused a bit of a renaissance in the railroad industry as long-distance freight shifted from trucks to more efficient intermodal rail transport, causing the illustrious Warren Buffett to start buying up the nation’s railroads one by one.

As high prices tend to do, it also created a “new” industry: American and Canadian oil production from shale and tar sands. Those technologies only work when oil prices are high, though; but when they work, they seem to work extremely well — so much so that the United States in 2014 was poised to become the world’s largest oil producer.

That’s when things changed, however, in rather quick and dramatic fashion. According to Abdullah al-Badri, its Secretary General, OPEC decided in November not to cut its production to compensate for the additional American production, thus creating an oil glut of about 1.5 million barrels a day.

Consequently, 2014 saw one of the most dramatic drops in the oil price since those first two oil shocks, as this chart from the Federal Reserve shows: 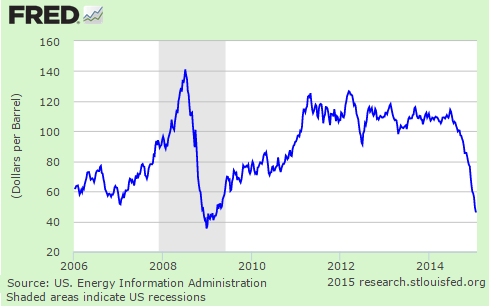 So, did this drop bring joy and happiness to all who have suffered for the past 40 years? Not nearly as much as you would expect.

Airlines have reaped a windfall, naturally, but have come out declaring publicly that they are not passing the savings on to consumers. UPS started imposing fuel surcharges back when oil prices were high, but have not made any significant reductions since the price of oil started falling. I’ve seen no reports of utilities dropping their rates as natural gas and oil prices have reached historic lows either.

The list goes on. Knowing how businesses live to make profits, I guess that is not surprising. In time, if oil prices remain low, competition will soon create cracks in the dam and those costs will start to drop, too. But…

My guess is not, and I base that on the the comments referred to above, of OPEC’s Secretary General. A recent Reuters report quotes him as saying,  “Now the prices are around $45-$50 and I think maybe they reached the bottom and will see some rebound very soon… It will take some time, ” he said. “It will take another four-five months and we will not see some concrete efforts before the end of the first half of the year due to the reason that we will see how the market behaves at the end of the first half of 2015.”

So, now we have two independent factors tracking for significant changes this summer:

Should those two events coincide, it is not beyond the realm of reason to expect the economy to react negatively.

1. Don’t buy that gas-guzzler on the assumption that oil will stay low. (Conversely, if you have one, it will fetch a good price now.)

2. If you considered getting into energy stocks or mutual funds, now may be a good time.

3. Be prepared for disproportionate price increases as the same businesses who didn’t drop prices with low oil prices use the rising oil price as justification.

8 Responses to “How long will oil prices stay low — and what should you do?”