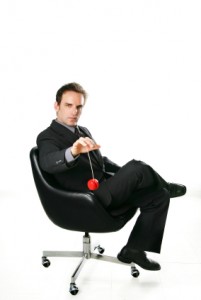 Whether they’re invested in the stock market or in a passbook savings account, many Americans are feeling frustrated these days. The reason? The economy bounces up and down but never seems to gain any traction or go any higher.

The stock market soars in the year’s first quarter, then gets jittery over Europe and dives in the second quarter. The economy adds a lot of jobs for a while, then very few jobs for the next few months. Gas prices soar, leading pundits to predict five and six dollar pump prices. Then they decline, allowing millions of motorists a sigh of relief. Then they begin inching up again.

Get the picture? It’s up-down, up-down, up-down. There’s no sense of sustained momentum, the kind that leaves folks buoyant about their own futures and those of their children.

No wonder some economic gurus refer to it as the “Yo-Yo Economy.”

But there’s a different kind of yo-yo — or more appropriately YOYO — at work these days. And this one has more far-reaching ramifications for most of us than a teeter-tottering stock market and a jobs scene temporarily riding a pogo stick.

The latest manifestation of the phenomenon came in early July, when AMR and American Airlines filed a lawsuit requesting a U.S. Bankruptcy Court rule the company has no obligation to continue health coverage and life insurance benefits for retired employees. According to the suit, the companies’ obligations as of 2010 stood at $1.26 billion for unionized retired pilots, flight attendants and ground workers, as well as its non-union retirees. The companies are liable for another $111.4 million to Trans World Airlines retirees.

In other words, if a court ruling goes against AMR/AA’s retirees, people who worked for years or decades for American Airlines, all the while counting on their health and life insurance being funded in retirement by their long-time employer, will have to face the facts that that assumption was tantamount to fool’s gold, and they will have to foot the bill themselves.

It’s not the first and certainly won’t be the last time retirees have found their expectations dashed. In the last few years, paid pension and health care coverage for retirees have been disappearing almost as fast as hot dogs at a Joey Chestnut appearance. Fact is, those benefits were established when people lived for much shorter periods after retirement, and when healthcare costs were a fraction of what they are today. Continuing to pay those costs in many cases puts the companies that offered them in an unsustainable position.

But lest you think this is a diatribe against the big, bad corporation, think again. Public sector workers are also seeing retirement benefits jeopardized.

Barry Paster, who heads Bridge Creek Capital Management, LLC is Massachusetts, writes in the Cape Cod Times that municipal worker pensions are being or have been cut in a lengthy roster of American cities. The latest to attempt to trim benefits are Central Falls, R.I., North Las Vegas, Nev. and Stockton, San Jose and San Diego, Calif. Paster notes Illinois, California, New York and Kansas are in trouble, and 43 states have tried cutting pensions.

As Paster notes, a decade of a flatlining U.S. stock market, along with years of falling fixed-income yields, have spelled trouble for pension funds that counted on higher returns. The woes are exacerbated by the fact politicians didn’t want to risk their futures by nixing benefits of municipal workers. So workers were promised more in health coverage and pensions than was sustainable.

The final ingredient in this disastrous stew is, as mentioned earlier, longer life spans, which mean heavier pension and health care coverage loads. Time was when a guy might have dropped to the pavement three or four years into his retirement. His children or grandchildren, however, might live for three or four decades after retirement. It’s hard to see that as anything but a tenfold increase in pension obligations, if all other variables are held constant.

You’re on your own

If you are counting on a pension and health coverage to make your retirement years more enjoyable, it’s time to adopt a different expectation. We may have dealt with a yo-yo economy in recent years. But the more crucial realization for you is that the future will be a You’re On Your Own (YOYO) economy.

Instead of assuming someone will take care of your financial obligations in retirement, you’ll have to face the fact that that someone will be you. That means starting to save now, and increasing saving levels if you’ve already been at it for a while. It means establishing and adhering to a budget. It means avoiding the temptation to buy everything hyped by this generation of Mad Men.

It means seeking the counsel of a financial advisor to help you establish a diversified portfolio of stocks and fixed-income investments that can grow over time and help fund your retirement lifestyle and increasing healthcare costs.

Sure, it takes more responsibility, but a YOYO strategy can be freeing, allowing you to stop fretting over whether your pension and health care coverage will prove as short-lived as a Chicago Cub winning streak. Instead, you’ll know income will be there for you, because you and not someone else attended to the task.

Bottom line? In contrast to the ups and downs of a yo-yo, a YOYO mindset could put you on a permanent upswing.

One Response to “Stringing Along With the Yo-Yo Economy”