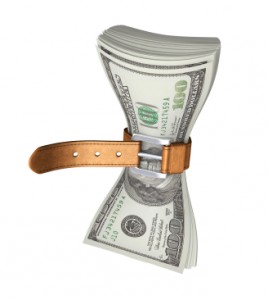 When you save your money instead of spending it, you are actually hurting the economy in a small way. It may seem counterintuitive that your savings are adding to our economy’s decline, but they are. Most of us have come to embrace globalism and our intertwining financial lives, but we often fail to realize that saving our money actually has far-reaching, unintended consequences.

Most consider increasing the amount of money you save to be a positive financial attribute, but it can actually work against the greater good when it happens across the board. Economists call this the Paradox of Thrift.

Spend, save, or invest

When you earn money, there are three basic things that you can do with it. You can either spend it, save it, or invest it. With the American economy treading water, the nation’s savings rate has been steadily creeping up. Historically, Americans have not saved or invested much of their paychecks. In fact, the savings rate in America has typically hovered around 1% of a person’s take home pay.

But with today’s economy struggling and unemployment high, the nation’s savings rate has recently risen to 5-6%. With people saving more money from each of their paychecks, less is being spent on consumer goods. While an increased savings rate is typically seen as a positive financial trait, it can create unintended problems.

What is the Paradox Of Thrift?

In the early 20th century, the famous economist John Maynard Keynes wrote about what he called the Paradox of Thrift which ultimately states that saving more money instead of spending it can exacerbate a troubled economy like the one we currently find ourselves in. Consumer spending drives 70% of the American economy. If more people are saving and investing their money instead of spending it at our nation’s malls and other retailers, the entire economy suffers.

This can turn into a vicious, self-perpetuating cycle. More savings results in less spending. Less spending on consumer goods reduces the revenues that American companies earn. When companies’ earnings decrease, they typically lay off workers. When workers lose their jobs, they tend to tighten their belts and try to save more money — though they might actually have less to save (or spend) at this point.

In other words… Saving money and being thrifty results in less spending, fewer jobs, a declining economy, and an aggregate decrease in savings. Quite the paradox.

What should you do with your money?

Given the above, what should you be doing with your own money in the current economy? In my view, even with interest rates at all-time lows, you should continue saving and investing for your future and your financial goals. Honestly, even a 6% savings rate isn’t good enough. Many financial planners encourage people to save 10% or more for retirement alone — and that doesn’t include other financial goals such as buying a new home or helping your children pay for college.

Why you shouldn’t care about the Paradox Of Thrift

Your money — and what you choose to do with it — is just a small part of the economy. In the grand scheme of things, it really doesn’t matter what any one person does with their money. It only matters what we all do as a collective group. Should large-scale, macroeconomic factors such as this dictate what we do as individuals? Should second and third order effects bother us if we are looking out for our own wellbeing? Not in my book.

So… Do you feel bad about hurting the economy when you stash some money in your savings account or buy a CD? Bad enough to go out and start spending? More generally, do you believe in the Paradox of Thrift — that saving more of your money contributes to an overall economic decline?

16 Responses to “The Paradox of Thrift”